A Recon Marine in Afghanistan

It did not ring true to me after having read Marcus Luttrell's "Lone Survivor": http://www.amazon.com/Lone-Survivor-Eyewitness-Account-Operation/dp/0316067598

Yeah, I don't know, that's why I put it up here. Either way, pretty gritty prose. Maybe I should have put it in the Creative Writing section...

Thanks Rich. I felt good reading that, and a bit happy and sad for the Marine. I would like to be there to push the button dropping munitions on the Taliban.

Now that is a way to raise revenue! For five grand you get to push the button, releasing a 500 pound bomb on a terrorist. For ten grand you get to send a hell-fire missle down Osama bin Ladin's throat. The remote control would be set up at a working class bar where guys could pool their money, and draw straws to push the button, while it is all caught on a television camera. If you think the Super Bowl might be tense when you have money on the game . . . damn. I bet you could hear a pin drop. Target acquired, steady, steady, FIRE~~~

This is a very treacherous time over in Afghanistan. I pray for these men and women whether there is a God or not.

New Model for Afghan War: 'Population Is the Prize' 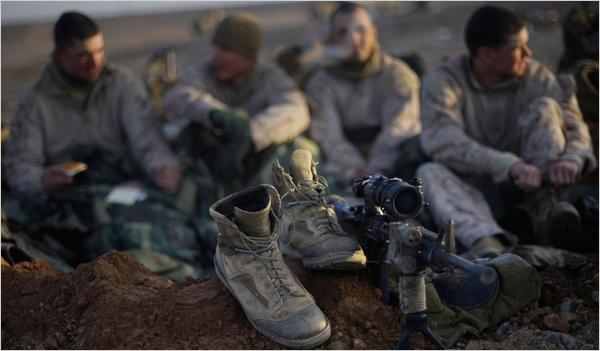 "Now American and Afghan troops are poised to take Marja, a Taliban-held town in southern Helmand Province. It is not clear when the battle will begin, but this time commanders say they will do something they have never done before: bring in an Afghan government and police force behind them. American and British troops will stay on to support them.

'We've got a government in a box, ready to roll in,' said Gen. <a href="http://topics.nytimes.com/top/reference/timestopics/people/m/stanley_a_mcchrystal/index.html?inline=nyt-per" title="More articles about Stanley A. McChrystal.">Stanley A. McChrystal, the top American commander here.

Indeed, Marja is intended to serve as a prototype for a new type of military operation, based on the counterinsurgency thinking propounded by General McChrystal in the prelude to President Obama's decision in December to increase the number of American troops here to nearly 100,000.

More than at any time since 2001, American and NATO soldiers will focus less on killing Taliban insurgents than on sparing Afghan civilians and building an Afghan state.

'The population is not the enemy,' Brig. Gen. Larry Nicholson, the commander of the Marines in southern Afghanistan, told a group of troops this week. 'The population is the prize — they are why we are going in.'"

This is the first time I've been to the snopes site, but I wouldn't trust it based on its illogical report on this marine's letter:

First, snopes brands it as 'false', then a few paragraphs later they say they don't know. They can't tell if it is or is not from a marine stationed over there.

Second, they say that the marine misstates the location of where he is located and so that casts doubt on the letter. Then, a bit later they mention that someone in recon might actually change some things to cover up where he is actually located. Duh!!

Finally, independent of Snopes attempt to clearly label it as false without actual evidence, this letter sounds like something a marine or someone stationed in tough duty would say, has the ring of truth in that sense.

Afghans are far more optimistic about their future than they were a year ago and support the presence of US troops in their country, according to a poll released yesterday .

Some 70 per cent of Afghans think their country is “going in the right direction”, compared with 40 per cent a year earlier – the highest figure since 2005, according to the survey for the BBC, ABC news and ARD of Germany.

Despite claims to represent the Afghan people, the Taleban won little support: 69 per cent of Afghans said they presented the greatest danger to the country’s future.

The foreign secretary, David Miliband, said that the findings were “striking and significant”.

“The Afghan people don’t want to go back to Taleban misrule. This is a war of the mind as much as a war for ground. The important thing now is that we take advantage of the sense of optimism.”

However, 43 per cent of Afghans said they would prefer the country to be run as an Islamic state while 32 per cent favour continuing down the path of democracy.

Support has revived for President Hamid Karzai, with 72 per cent believing he is doing a good or excellent job, even though only 39 per cent believe his re-election last year was conducted honestly and 59 per cent think the vote counting was fraudulent.

The rise in optimism appeared linked with improvements in living conditions: 55 per cent of Afghans say they have an electricity supply, more than double the 19 per cent who did in 2009.

Some 41 per cent believe their job prospects are good or very good, and 59 per cent own a mobile phone.

However, the picture was gloomier in Helmand province, the Taleban stronghold where British troops are based. Only half of Helmand residents said they thought the country was going in the right direction and one in three believe the Taleban will defeat the government, against one in ten in the country as a whole.

Corruption was cited as a major problem by 76 per cent of respondents, and support for the US and the government dropped sharply in the Taleban-dominated south and east.

The results follow the bloodiest year for Nato forces in Afghanistan since the 2001 US-led invasion. More casualties are expected as western troop numbers increase in preparation for a planned surge against the Taleban.

The Afghan Centre for Socio-Economic and Opinion Research spoke to 1,534 Afghans in all 34 provinces in December for the poll, which has been carried out every year since 2005 apart from 2008.

"You'd think they had learned their lesson."

You mean like people who learn not to post long lengthy posts that folks have asked be shorter?

See how confusing it is when folks do not lead by example?

As Peter stated, I believe it has the ring of truth to it as well. Knowing that the letter might be published, Saucy Jack went to lengths to ensure no extensive details were given (other than snipers haven't been employed). We call this Operations Security (OPSEC). The writing gives him a constructive outlet to pass the time.

I like it a lot. Recon are astute observers. Hope he and his brethren make an impact and come home safe.