Useful info. Not anything I'm much concerned about, which party and PM come to the fore. Perhaps you think William that the problems can be reduced or eliminated by a change of government? Perhap

Maybe Israel should force Palestinians to relocate to Iran.

Iran is not particularly kind to its tiny. Arabic-speaking minority. If forced, the mullahs might say, "Sure, but give us back our Jews, bitch."

Nobody wants more Palestinians in the more immediate neighbourhood, where Syria and Lebanon keep Palestinians from permanent citizenship, and mostly in urbanized refugee "camps" since forever.

I noticed in some recent Israeli reports a few uses of "Palestinian Israelis" -- citizens -- instead of the more common "Arab Israelis." One standout from the coalition assembled by Bennett and Lapid is of course the first-ever inclusion of Arab parties, in this case elements of the so-called United Arab List. The Arab kingmaker is Mansour Abbas, and his party is Islamist in stripe, apparently.

If the vote is not delayed, and a new government is achieved, I'll be looking closely at how much government policy will come from Yair Lapid's party Yesh Atid. With economic development plans for Palestinian/Arab Israelis, plans to increase workforce participation for women, it's kind of a "Liberal" (centrist in Israel) set of planks.

New Israeli Coalition Government Set to Be Sworn In Sunday

This will happen, I presume, just after the fat lady sings.

-- I'd meant to give a link earlier to the Knesset results from the last election, by party and faction: List of political parties in Israel - Wikipedia. Just for the items in the table column titles "Ideology" ...

New Israeli Coalition Government Set to Be Sworn In Sunday

-- from the Times of Israel:

Israel awakens to its most representative government ever, courtesy of Netanyahu

[...] As they assembled for the traditional photograph with the president, there was no mistaking the breadth of Israel represented by the ministers in the government headed by Prime Minister Naftali Bennett and Alternate Prime Minister Yair Lapid. On one side of President Reuven Rivlin sat Bennett, Israel’s first Orthodox prime minister and the former head of the Settlers Council. On the other sat Lapid, the secular centrist who drew together the radically improbable eight-party mix that on Sunday unseated Benjamin Netanyahu after 12 years.

Among those arrayed behind them stood an Ethiopia-born minister (Pnina Tamano Shata), a former IDF chief of staff (Benny Gantz), Israel’s first openly gay party leader (Nitzan Horowitz), a minister from the Arab community (Issawi Frej), other ex-army officers, and immigrants from the former Soviet Union. In her wheelchair to Lapid’s left was Karine Elharrar (she has muscular dystrophy), the incoming energy minister. 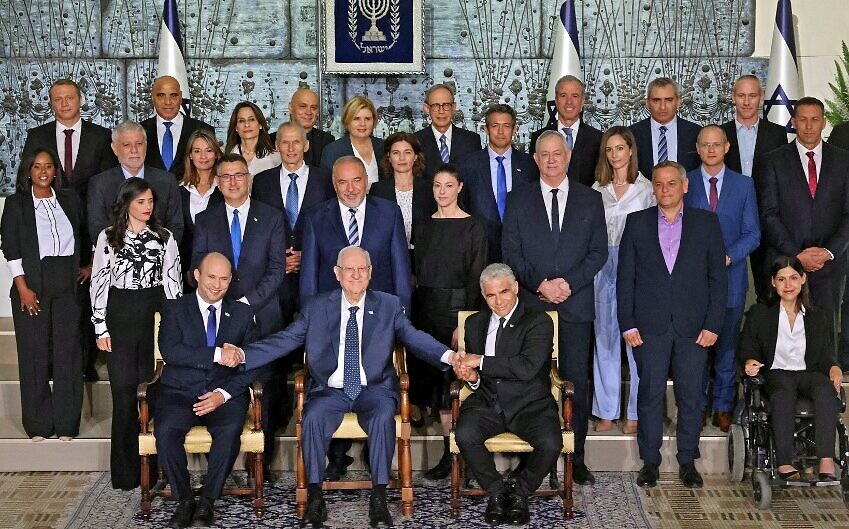 A Jew speaks.... When WE were led into the gas chambers, THEY said nothing. When WE were forcibly converted, THEY said nothing. When WE were thrown out of a country just for being Jews, THEY said nothing. BUT when WE now defend ourselves, all of a sudden THEY have something to say. How did WE take our revenge on the Germans for their "Final Solution?" How did WE take revenge on the Spanish for their Inquisition? How did WE take revenge on Islam for being Dhimmis? How did WE take revenge on the lies of the "Protocols of the Elders of Zion?" WE studied our Torah, WE innovated in medicine, WE innovated in defense systems, WE innovated in technology, WE innovated in agriculture, WE composed music, WE wrote poetry, WE made the desert bloom, WE won Nobel prizes, WE founded the movie industry, WE financed a fledgling democracy, WE fulfilled the word of G-d by becoming a Light Unto the Nations of the Earth. DEAR WORLD, when You criticize us for defending our heritage and our ancestral homeland -- WE, the Jews of the world, do exactly what You did to/for us; WE IGNORE YOU. You have proven to us for the last 2,000 years that when the chips are down, animosity towards Jews reigns supreme. Now leave us alone -- and go sort out problems in your own back yard whilst WE continue our 5778-year old mission of enhancing the world we all share. -The Jews

Useful info. Not anything I'm much concerned about, which party and PM come to the fore. Perhaps you think William that the problems can be reduced or eliminated by a change of government? Perhap