From RBG to Amy Coney Barrett

Though she may be a politically inverted version of her predecessor , the import is her jurisprudence and legal/constitutional philosophy.

Just to register the process, this was the last procedural step.

Now it heads to the real vote--today.

If all goes well, tomorrow we will have a new Supreme Court Justice and the ruling class (mostly Democrat) beast of using the Supreme Court to cheat will go back into its cage for a while.

If anyone is confused about the squish Murkowski, she voted with the Dems on trying to stop the process, but since that didn't work, she will vote today with the Republicans on confirming Judge Barrett as Justice.

This squish has no form, no boundary. There is no top and no bottom. Only middle. And it's a squishy middle, too.

I don't know if Sarah Palin can ever make a political comeback. The bad guys really damaged her inside and out. But I hope she heals and does it. She would be a gazillion times better in Murkowski's place, just for starters.

I've seen it around that Justice Clarence Thomas will issue the Oath of Office to Judge Any Barrett tonight after the Senate confirmation.

Let's see if that happens.

I would love it since there is a huge case load for her to dig into right away.

Yay! The good guys are winning.

Her acceptance speech was a nice and well timed civics lesson.

Her acceptance speech was a nice and well timed civics lesson.

I saw it and Clarence Thomas did swear her in.

And, if I'm not mistaken, he botched the first line (he left out her name), but she responded correctly.

If you want to have some fun, go to twitter and type the following into the search field.

HC ain't taking this well. Neither are her peeps.

f you want to have some fun, go to twitter and type the following into the search field.

HC ain't taking this well. Neither are her peeps.

Here's a fun piece about Hillary Clinton's "Happy Birthday to this future president" tweet from Monday 4 years ago.

The piece quotes Hillary's saying on a podcast by "New York Times contributing opinion writer Kara Swisher" that the thought of four more years of Trump makes her "literally sick to [her] stomach."

Clinton was featured on a podcast released Monday in [which] she said she “can’t entertain the idea of him [Trump] winning” this year’s election.

“It makes me literally sick to my stomach to think that we'd have four more years of this abuse and destruction of our institutions, and damaging of our norms and our values, and lessening of our leadership, and the list goes on,” Clinton told New York Times contributing opinion writer Kara Swisher on her podcast.

In the sense of revenge and justice, and in the context of Amy Barrett being sworn in, it was really good to see this again.

Here's a fun piece about Hillary Clinton's "Happy Birthday to this future president" tweet from Monday 4 years ago.

The piece quotes Hillary's saying on a podcast by "New York Times contributing opinion writer Kara Swisher" that the thought of four more years of Trump makes her "literally sick to [her] stomach."

This is a little late coming, but Mitch McConnell is joining in the fun.

Cocaine Mitch: “It Was a Wonderful Birthday Present For Hillary Clinton to Confirm Amy Coney Barrett to the Supreme Court on Monday” (VIDEO)

Here's the 18 second clip mentioned in the article:

As an aside, I always wondered what the name Cocaine Mitch referred to, so I looked it up. This is a term of endearment for Mitch. It's not derogatory.

Cocaine Mitch refers to a campaign ad in the the 2018 West Virginia Senate primaries by a guy named Don Blankenship. And that's weird since Mitch is a Senator from Kentucky. Blankenship hated Mitch and talked about unseating him as Senate Leader. With this ad, he was trying to capitalize on a drug bust a few year earlier on a cargo ship that belonged to the family of Mitch's wife, Elaine--the Chinese Chao family.

This attack was so offbeat that once Blankenship lost, Mitch and his peeps adopted the term as a nickname.

In a way, it actually helped make Mitch look cool when they paired him up with bandits and things like that in memes. And, to be absolutely truthful, if anyone in human history is in last place for being cool, it is Mitch McConnell.

You can read about all this here: Cocaine Mitch from Know Your Meme. You can even see the Blankenship ad there.

For a nice sense of closure, I found a perfect meme from there to tie into this thread. That actually is kinda cool.

I thought that last post would put a cap on it.

Then I found this. This is a knife wound in the gut to the left since they believe RBG should be replaced by a liberal.

It's even worse than I thought.

The left altered Ginsberg's positions in the press to make people believe she did not support a position Trump did.

Look at this crap. 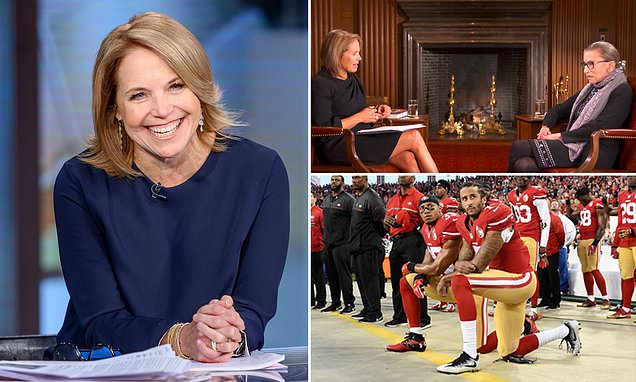 WWW.DAILYMAIL.CO.UK
Katie Couric has admitted to 'protecting' Ruth Bader Ginsburg from public backlash by cutting out negative comments she made about people who kneel during the national anthem, in her new book.

The mainstream establishment press is trash.