By Michael Stuart Kelly,
June 14, 2018 in Stumping in the Backyard

I signed a birthday ecard for the President and right at the end I was asked for a donation, which I declined, so I am not sure if the sentiments got through. Happy Birthday and Birthdays to come, President Trump. Hail to The Chief! Perhaps our Canadian bruddas and sista's can call him "The Chief" instead of the idiotic "emperor." He is always fully clothed and "well versed"  in public.

I am up to episode 12 or 13 of "The Crown" about Queen Elizabeth II. A few episodes ago, during an era around Churchill's last years, she realizes she has little power compared to Elizabeth The first. The expression on her face was priceless. She was "mostly" in charge of doings in "the palace" but not so much in government. What would be a good nickname for Elizabeth II? I won't try for a cut like the Canadiennes. I will call her "Eli."

Something else that struck me from watching "The Crown?" Our President Trump IS and Isn't a politician yet I saw similarities between PM"s Churchill, Eden, etc., and him. I won't say someone in government is a natural conniver, but you must be calculating and sly  . . . and thoroughly aware you are always advancing your informed position.

I signed a birthday ecard for the President...

Your post inspired me to open a new thread.

This year I didn't even open a thread on Happy Birthday to Me (it was on June 9 and William did a thing on the Calendar), but I like the idea of opening this one for President Trump. Happy Birthday, Donald! People just don't give you enough credit for not lying about your age - people are such envious losers! 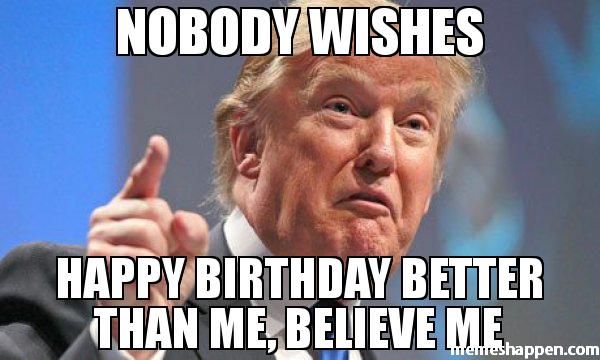